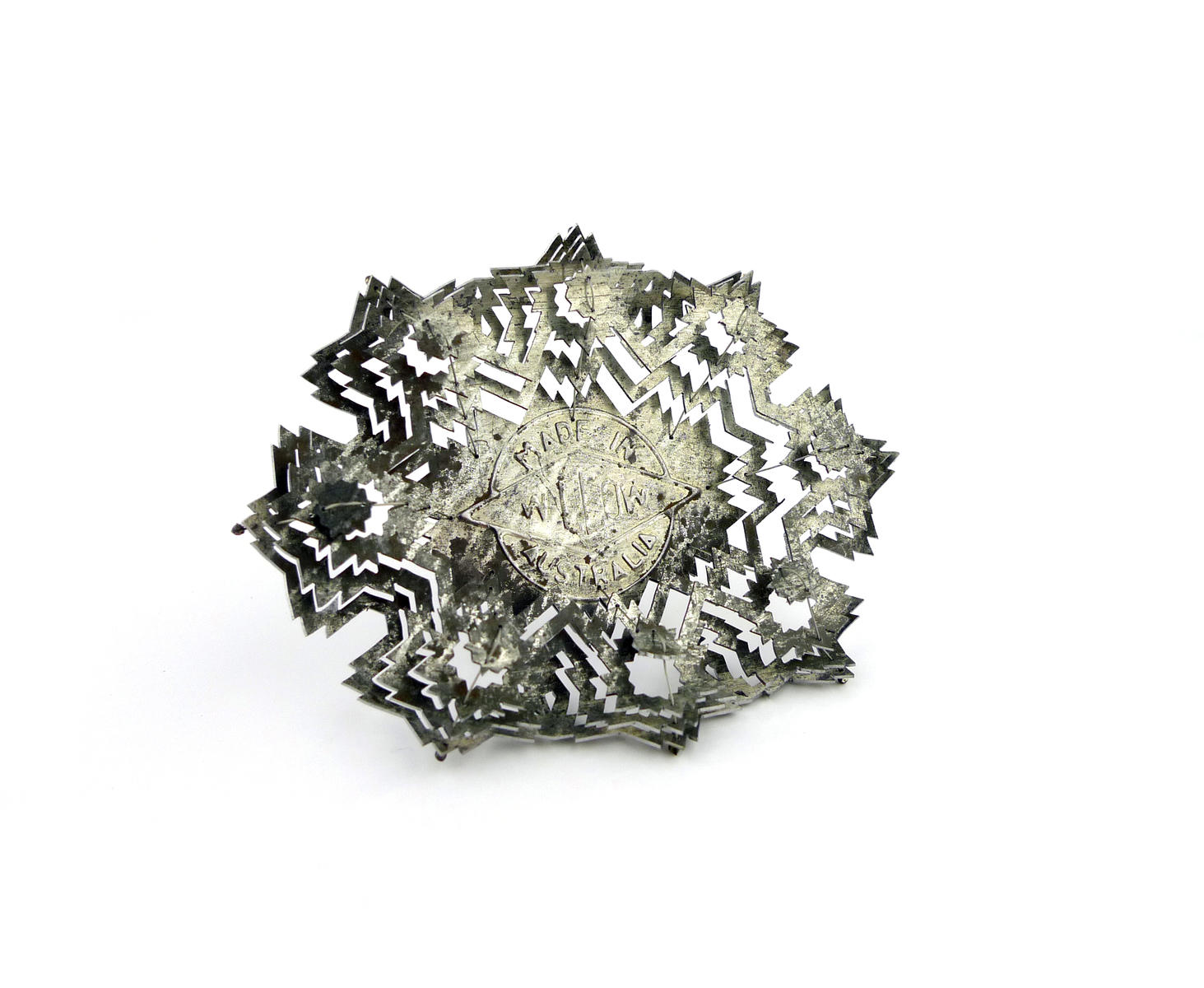 Australian-born artist and writer Melissa Cameron lives and works in Seattle, WA in the USA. She received her MFA in jewellery and metalsmithing from Monash University and a BA (hons) in interior architecture from Curtin University, in Australia. Her works are in the collections of the National Gallery of Australia, the Cheongju City Collection in South Korea, the Arts Centre Melbourne and Toowoomba Regional Art Gallery.

Melissa exhibits worldwide, and her works have featured in the publications Jewel Book, Art Jewelry Today 3 and Lark Books’ 500 Silver Jewelry Designs. She is the recipient of multiple grants from the Australia Council for the Arts and a Fellowship grant from Artist Trust in Seattle. Her writing appears on Art Jewelry Forum, and she serves on the Metalsmith Magazine Editorial Advisory Committee. 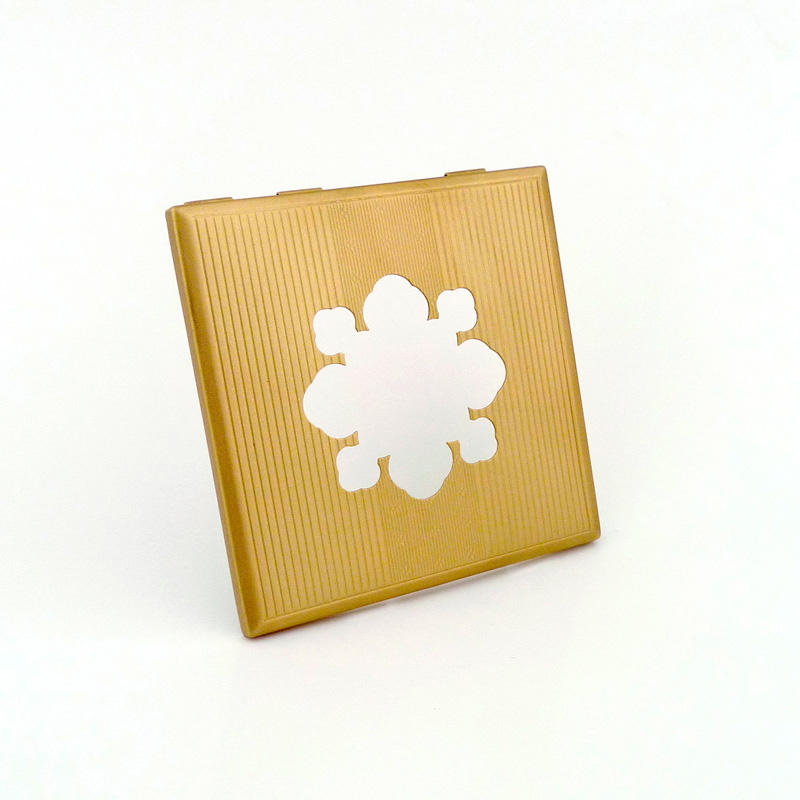 I am a research jeweler.

The evidence of my investigations - the jewelry I produce - speaks to my interest in architecture, geometry, social justice, and the human body. Through my work I attempt to manifest my belief in the interdependence of all matter, and the sacredness of human life.

Each work is a response to the idea I am interrogating at the time. The making involves extensive research, meticulous preparatory drawings and precise execution. My material choices seem uninhibited, yet are very deliberate. I build with parts that augment my narrative, hoping that when together the components will resonate.

Melissa has her largest jewellery piece to date currently on display at the Bellevue Arts Museum’s biennial showcase Metalmorphosis. Look for her at the upcoming Free First Friday open house, on December 2, 2016. This show closes on the 5th of February, 2017.

From the 24th of November Melissa's work will feature in Unexpected, a juried exhibition at the Craft Council of British Columbia. She will travel to the opening in Vancouver where she will also feature on a panel discussion about this exhibition on Saturday the 26th of November.

The two jewellery pieces that make up the Drone works from her Escalation series have just been accepted into the annual Schmuck jewellery exhibition in Munich, Germany, which will take place between the 8th and 14th of March, 2017.

The Shared Concerns exhibition, coordinated by Melissa and Aran Galligan, will continue its tour in Australia in 2017, opening at Bilk Gallery in Canberra in mid-April.

At the re-branded SNAGnext conference this year in Asheville, NC, Melissa spoke in the SNAGspark portion of the program, giving a presentation entitled Holistic Thinking: Interconnection in Jewels and Practice. Also at the PechaKucha style 20 / 20, she presented twenty slides about the works on show at her recent Body Politic exhibition.

The Shared Concerns exhibition, coordinated by Melissa and Aran Galligan began its world tour at Penland Galleries in May 2016, just prior to the SNAGnext conference in nearby Asheville. The exhibition then travelled to Velvet da Vinci gallery in San Francisco where it opened on the 1st of July. The show continues its tour in Australia in 2017.

Melissa’s solo exhibition Body Politic was opened by Nigel Landon at Bilk Gallery in Canberra, Australia, on the 18th of March 2016. The show closed on the 23rd of April 2016. Prior to the opening, two works were held for purchase by the Senior Curator of Decorative Arts at the National Gallery of Australia, Dr Robert Bell. She spoke to the students of Gold and Silversmithing in the School of Art at the Australian National University at the invitation of their workshop head, Dr Rohan Nicol.

Cominelli Award 2014. Two of Melissa’s works were shortlisted for 2014’s Cominelli award, and will go on display alongside the other 33 finalists at the end of August in the Palazzo Cominelli, Cisano di San Felice del Benaco in Salò, Brescia, Italy. 31st August - 5th October 2014, Opening: 30th August 2014, 6.30pm.

For the first weeks of August, Melissa went to Germany for a short enamel residency at the Künstlerwerkstätten in Erfurt. Her time was spent teaming up with her regular enamel collaborators working on pieces for the Heat Exchange 2 exhibition, which was exhibited at Craft in the Bay in Wales, followed by Scotland and Germany in 2016.

Melissa’s One Design collection of works went on exhibit at Studio 20/17 in Waterloo, NSW, Australia from the 1st – 30th of August at 6b/2 Danks Street from 11am-5pm, Tuesday – Saturday. The One Design Workshop took place on the 23rd of August to coincide with the exhibition being in the gallery.

Seliena Coyle from Culture Craft in Northern Ireland included Melissa’s work in the Reclaim / Repurpose exhibition that took place throughout August 2014 in Derry at Ebrington. Melissa is featured alongside other artists such as Boris Bally and Bettina Speckner in this exhibition that focusses on artists who work with repurposed materials.

Joyaviva exhibition, curated by Kevin Murray, with the C3 Project; a collaboration between Melissa and fellow jewellery artist Jill Hermans, finished its tour in 2014. On the 29th of July it was presented in La Paz, Bolivia. On the 7th of August it opened at Centro Cultural Las Condes, followed by a seminar at Universidad de Chile on the 8th of August. It finished on the 31st of August, 2014

Joyaviva exhibition, curated by Kevin Murray, with the C3 Project; a collaboration between Melissa and fellow jewellery artist Jill Hermans, was at Objectspace in Auckland, New Zealand following two successful outings in Melbourne and Sydney in 2012. It was then in Mexico from the 10th of April 2014 at the Museo Nacional Culturas Populares.

The Tinker, Tailor, Soldier, Sailor exhibition curated by Kirsten Fitzpatrick is still touring Australia. Catch it at La Trobe Regional Gallery from the 8th of February until the 6th of April in 2014.

Radical Jewelry Makeover, curator Susie Ganch. This exhibition opens on the 4th of April at the Visual Art Center of Richmond, VA, and will then travel to the Philadelphia Art Alliance and Houston Center for Contemporary Craft. In a pre-emptive strike, Melissa will be the visiting artist at Virginia Commonwealth University from the 19th - 23rd of February 2014.

The Digital Hand, curator Kathleen Browne. School of Art Galleries, Kent State University, OH. February 11th - 28th, 2014. Melissa will be a visiting artist in the jewelry/metals program and will attend the opening on the 13th of February 2014, as well as give a public lecture on her work on Friday the 14th of Feb at 12 noon.

More Classes. Melissa taught Kiln-Fired Liquid Enamelling on Steel at Danaca Design again on the 25th of January, 10.30am – 5pm. She demonstrated a concentrated workshop on the basics of enamelling onto steel including surface preparation using the sandblaster.

Transformation 8 - Contemporary Works in Small Metals, the Elizabeth R. Raphael Founder’s Prize Exhibition, first seen from February to July at the Society for Contemporary Craft in Pittsburgh in 2012 was touring, and with it Melissa's 2011 piece Internalised.The exhibition was displayed at the University of Arkansas, Little Rock Art Gallery, from August 15 - October 15, 2013 and then at the Leigh Yawkey Woodson Art Museum from November 16, 2013 - January 19, 2014.

Melissa sent a collection of works to Tereza Seabra Gallery in Lisbon for their annual Christmas exhibition.

The Tinker, Tailor, Soldier, Sailor exhibition curated by Kirsten Fitzpatrick continued touring Australia. In 2013 the exhibition went to Logan, Toowoomba, Rockhampton, Gosford, Tamworth and Hurstville, following on from The Jam Factory in Adelaide, Grafton, Wagga Wagga, Bunbury and Geraldton-Greenough in 2012.

Kiln-Fired Liquid Enamelling on Steel. Melissa taught a weekend workshop at Danaca Design in the University district of Seattle, demonstrating the basics of enamelling onto steel including surface preparation using a sandblaster. The class ran from 10.30am – 5pm on the 28th and 29th of September 2013.

Seams Seams a group exhibition at the MADA gallery on the Monash Caulfield campus, showcased graduates of both Monash and Rhode Island School of Design (RISD) in the US. The symposium, at which Melissa spoke, coincided with the opening on the 19th of July at Monash. The exhibition ran from the 17th of July until the 17th of August, 2013.

Melissa's specially made work To my Bruces/Tears of an Oyster featured in the Words and Works form a World Away exhibition along with other Australian and Estonian artists, which was curated by Claire McArdle and displayed at the Project Space gallery at RMIT in Melbourne. The exhibition ran from the 17th of July until the 18th of August, 2013.

Melissa presented her paper How to become an artist jeweller: a Seattle community case study at the 2013 Jewellers and Metalsmiths Group of Australia conference Participation and Exchange in Brisbane on the second weekend in July, which was closely followed by her presentation Staying Connected at the Seams Seams symposium at Monash Art Design and Architecture (MADA) in Melbourne.

The Seattle Metals Guild Biennial Exhibition is was displayed for three months at the Washington State Convention Center in Seattle, Washington. It closed on July 7, 2013. For more details of Melissa's participation see her blog for details.

Ferrous An exhibition of jewellery works executed in steel opened in March, the first Crafthaus and Velvet da Vinci simultaneous gallery and online exhibition. Following this it travelled to Toronto to 18 Karat, a local gallery that served it up as a part of the 2013 SNAG conference. (See the Crafthaus link for the online version of the exhibition.)

Bridge 12 Melissa Cameron, Kevin Snipes, Betty Vera featured in three simultaneous solo exhibitions at the Society for Contemporary Craft (SCC) in Pittsburgh, from November 9, 2012 — March 30, 2013. Melissa presented a workshop Building Jewelry from Found Objects at the SCC in early March 2013, and visited with several groups of university students in the area as well as taught a group of seniors at a local high school. For more you can download the catalog at SCC's website or read about what she got up to on Melissa's blog.

Melissa was also charged with producing instructions for a Drop-In activity for visitors to the gallery during the run of the Bridge 12 exhibition. In keeping with her practice she created a threaded jewellery piece that is made from pins and recycled card (old paint chips being her favoured material for the card portion).

Heat Exchange A cross continental survey of enamel, (Melissa was a co-curator with Elizabeth Turrell and Beate Gegenwart), which took place during the 2012 SNAG conference at the Shermer Art Centre and Museum, Phoenix, Arizona. The show then joined another enamel exhibition entitled Drawing Permanence and Place in Europe, and toured as Drawing Permanence and Place II to Erfurt and Ravenstein, Germany.

Transformation 8 - Contemporary Works in Small Metals from February to July at the Society for Contemporary Craft in Pittsburgh. This appeared alongside Charmed III - Third Time's a Charm, the third incarnation of the charm-focussed show at The Store inside SCC.

Melissa can be contacted at jewellery@melissacameron.net.

Her works are currently available in Australia:

in the United States

Melissa can be found online at her blog Jewellist at Large and Kimt02. She is a member of the professional organisations Art Jewelry Forum, the Seattle Metals Guild, the Society of North American Goldsmiths and Artist Trust.